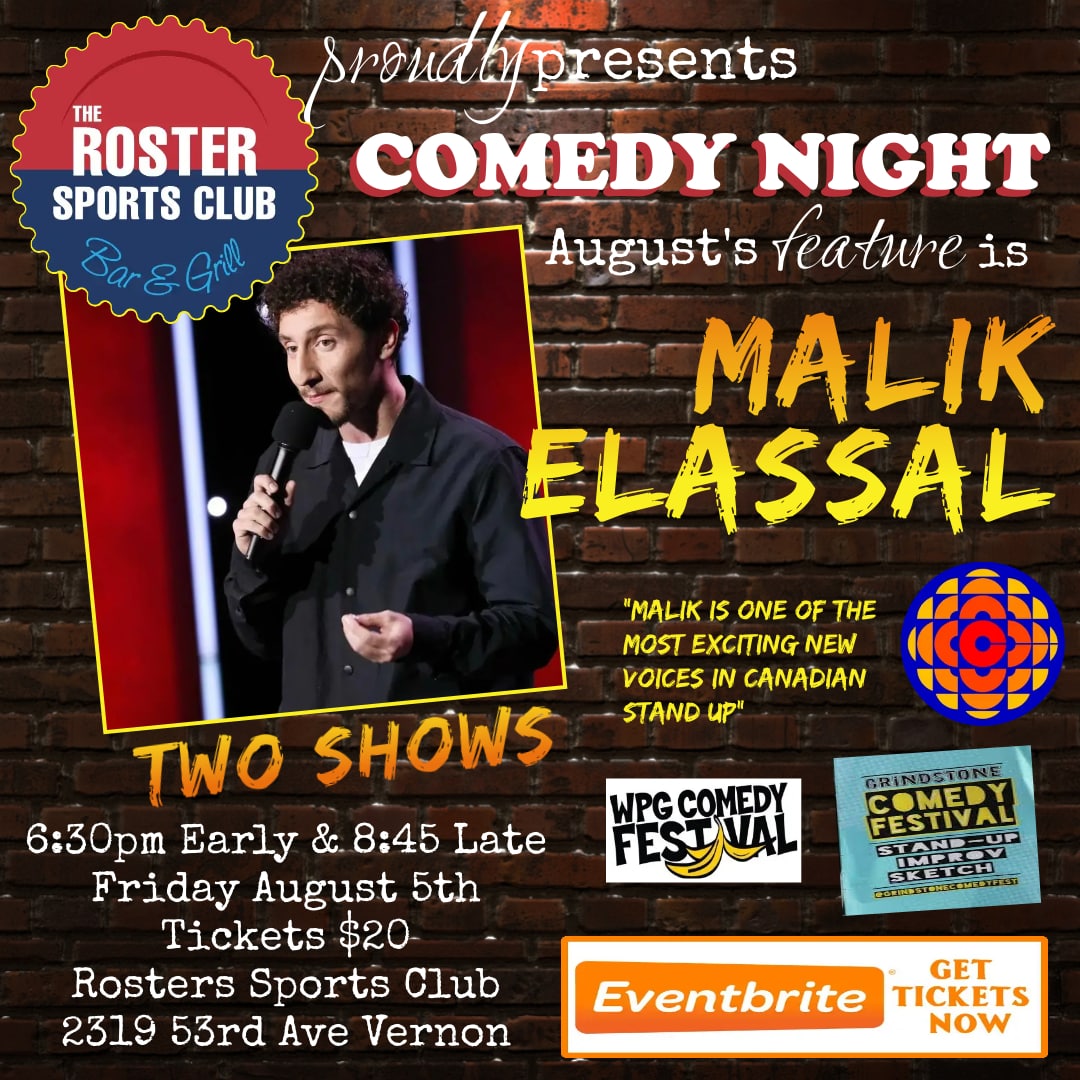 The Roster Rolls Out The Laughs

Malik Elassal is a Lebanese Canadian stand-up comedian, actor, and writer from Northeast Calgary. He has been making audiences laugh all over and has appeared at the Calgary comedy festival, was a finalist in the Grindstone comedy festival, and won Calgary’s best comedian. He has performed in clubs across the country. He has also acted on tv shows appearing on CBC, CTV, SyFy, and paramount pictures. He just taped his first stand up television appearance at the Winnipeg Comedy Festival. 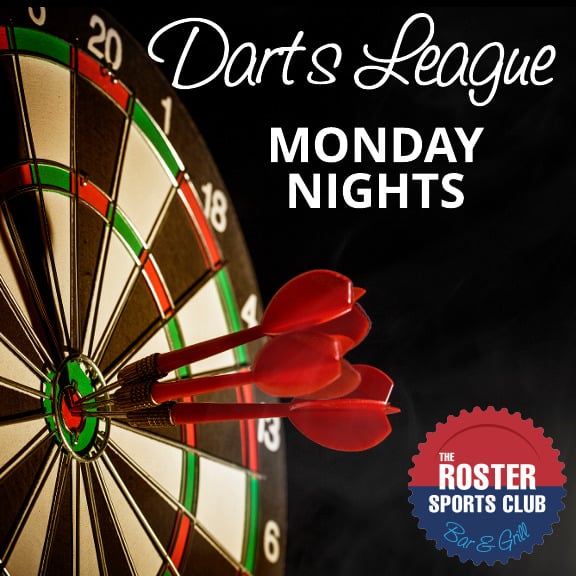 The Roster's Darts League is back by popular demand starting Monday, Jan 18 for 8 weeks (No darts on Family Day). The league is a great opportunity to enjoy a friendly yet competitive game of darts in a pub environment. $150 per team of three. Weekly prizes of $25 GC and grand prizes of $150, $100 and $50 GCs. Only 9 spots available so book soon. Email therostersports@gmail.com for more information. 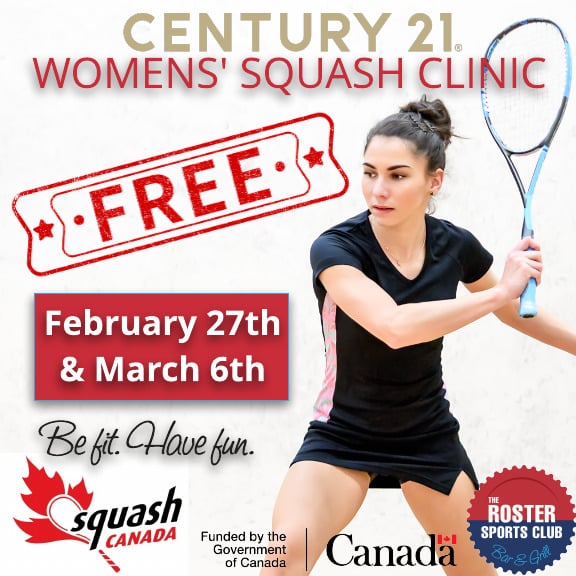 The Century 21 Womens’ Squash Clinic, a fun FREE clinic (Sunday February 27th and March 6th 3:30 - 5:00 p.m.) offers a great chance to learn the foundations of a new sport and meet other ladies that play. Come join the growing ladies squash community at The Roster Sports Club Bar and Grill and get an introduction to a sport that can burn up to 1,000 calories per hour. The sessions will have focused teaching from Rosters Squash Pro Peter Trafford, and former Squash Pro and Century 21 Realtor, Mark Koroll. Thank you to Squash Canada and the Government of Canada for supporting this initiative. Limited spots, call Pete at 250-549-0444 or email therostersports@gmail.com to register or learn more. 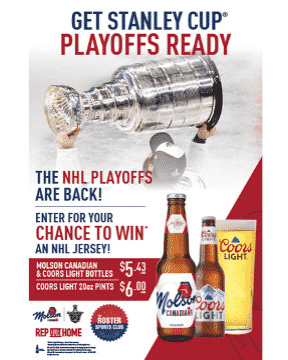 Chance to Win a Jersey!

Stanley Cup Playoffs are here! Order Molson Canadian & Coors Light Bottles or Coors Light Pints during the play offs and get entered in our draw for a chance to win an NHL Jersey of your choice! 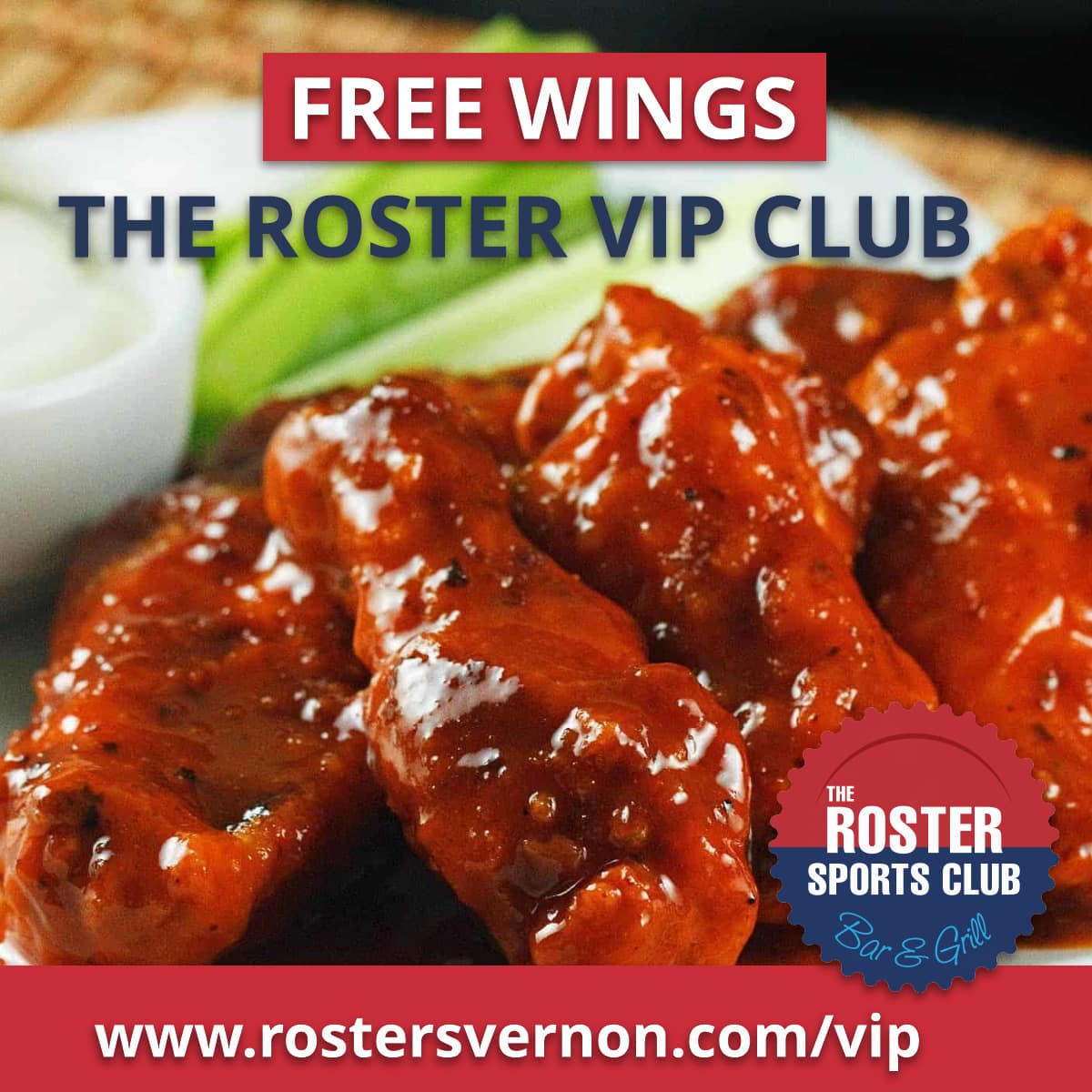 Sign up to receive EXCLUSIVE Text Promotions and Get 1LB FREE WINGS with one regular-priced entrée! Simply visit www.rostersvernon.com/vip – add your name & mobile number. Your WING coupon arrives a few minutes. After that you can expect 2 – 3 texts every month of great promos and specials exclusive to VIP ROSTER CLUB MEMBERS Only! 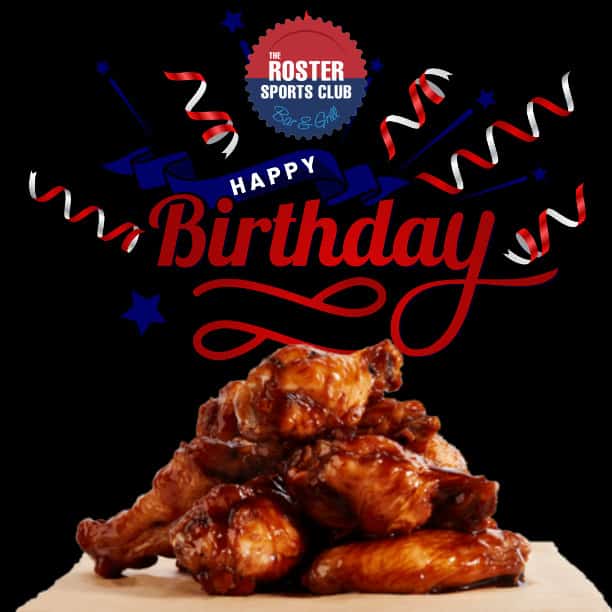 Free 1 LB of Wings On Your Birthday!

Get one pound of FREE wings on your birthday with a $10 minimum table / group purchase.

GIVE US A CALL

Sunday - Saturday
Closing hours change depending on evening and customers. Call ahead.