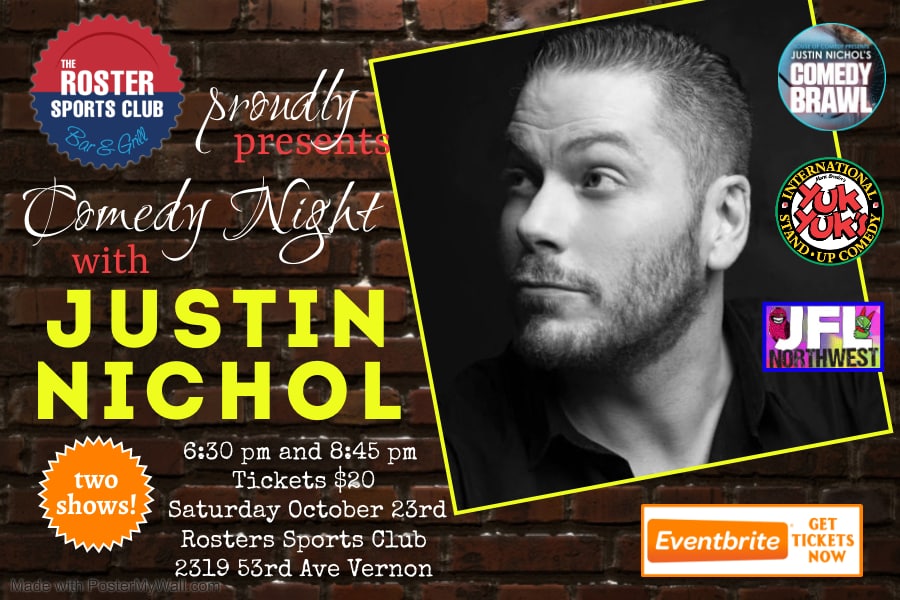 Join us for a night of comedy! Two opening acts PLUS Headliner – Justin Nichol! Justin Nichol is a high paced, loud and in your face comedian who doesn’t hold any punches. An every day hard working guy, he will win you over with his take on life as a new father, and his frustration with how the world seems to work. Before the world shut down, Justin was touring the country doing stand up comedy with highlights including tv appearances on the tv shows; Comedians on the Run, The U&I talk show, an appearance at the Just For Laughs Northwest Comedy festival opening for Tim Dillon, and a multiple time finalist in the Yuk Yuks “Yuk off” comedy competition. He’s also the creator and producer of Justin Nichols Comedy Brawl at House of Comedy BC. "Justin Nichol is a must see!" - David Kopp, Kelowna Comedy

Early show - doors open at 5:30 p.m. / Late show doors open 8:15 p.m. food and beverage sales before showtime and throughout the show. Shows will be in The Roster Lounge (Main entrance straight down the hall to the back and turn right). Early show ends 7:45 p.m. in the lounge but guests welcome to move to our pub or lounge on the premises should they choose to continue the evening.

GIVE US A CALL

Sunday - Saturday
Closing hours change depending on evening and customers. Call ahead.